RZA (born July 5, 1969), is the Wu-Tang Clan's chief producer. Also known as the Abbott, Prince Rakeem, the Rzarector, Bobby Steels and Bobby Digital, he was born as Robert Diggs. RZA first surfaced in the rap game during the early ‘90s as a member of the rap group All In Together Now, from Staten Island, New York (containing fellow Wu members GZA/Genius and Ol’ Dirty Bastard. 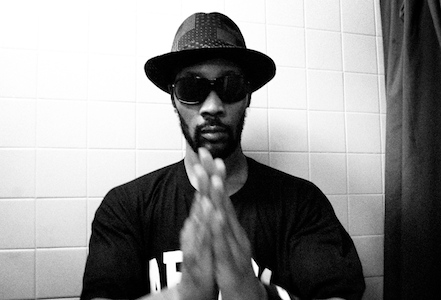 Following All In Together Now, he signed to the label Tommy Boy Records under the name Prince Rakeem. He issued his first EP Ooh We Love You Rakeem in 1991. He then formed the Wu-Tang Clan together with his fellow members. After a huge underground buzz surrounding the hit “Protect Ya Neck” he was able to sign the group to Steve Rifkind's Loud Records.

RZA, as a producer, is responsible for many Hip-Hop influential classics such as the group's 1993 debut, Enter The Wu-Tang 36 Chambers, which is considered to be one of the most influential albums ever.

Since that album he has created countless solo albums for the group, plus three more group albums. He has also created wonderful songs for legends such as the late Notorious B.I.G. and Big Pun.

In 1995, RZA became the Rzarector, forming the group Gravediggaz together with Prince Paul, Frukwan, and the late Poetic. Their debut album 6 Feet Deep was received as a classic.

Ghost Dog: The Way Of The Samurai (1999) was the first soundtrack RZA ever created. It's not going to be his last project in the movie business since he's working together with Quentin Tarantino, on his fifth movie, Kill Bill.

In 2007 and 2009 respectably, he did the scores of the Japanese anime Afro Samurai and Afro Samurai: The Resurrection starring Samuel L. Jackson. He recently and quietly released an instrumental album entitled, The RZA-Instrumental Experience, and worked with Raekwon on his highly anticipated Only Built 4 Cuban Linx… II.

Furthermore, he has acted in several movies, including Coffee and Cigarettes, American Gangster, Gospel Hill, Life Is Hot in Cracktown, Funny People, Derailed, Due Date and Repo Men.

He also appears in the Showtime TV series Californication. His directorial debut is for the film he co-wrote (with Eli Roth and Quentin Tarantino) and in which he plays the title role, The Man with the Iron Fists, also starring Russell Crowe, Cung Le, Lucy Liu, Byron Mann, Rick Yune, Dave Bautista, and Jamie Chung (both the film and its soundtrack featured music from the RZA and his Wu-Tang associates Ghostface Killah and Method Man, along with tracks from Kanye West and the Black Keys), along with his recent role in G.I. Joe: Retaliation.

In 2014, RZA took on the role of Tremaine Alexander in the film Brick Mansions opposite Paul Walker and David Belle. Brick Mansions is a remake of the film District 13 (French title, Banlieue 13).

In August 2012, RZA founded a new record label Soul Temple Records with a distribution deal from RED Distribution. On September 28, 2012 he hosted a show “Equals Three” replacing Ray William Johnson. He appeared on Earl Sweatshirt's album Doris, contributing a verse on the track “Molasses”. Despite artistic disagreements with Raekwon, RZA and The Wu-Tang Clan released their sixth album A Better Tomorrow in 2014.

RZA and Paul Banks will team up as Banks and Steelz for a joint album Anything But Words. Guest appearances include Kool Keith, Ghostface Killah, Method Man, and Masta Killa.