Just like any burgeoning culture, hip-hop is inundated with corruptions and false promises. Lately, the MCs in commercial leadership are too busy basking in their new found riches to uplift the starving streets that supported their talent in the first place.

As a member of one of the most significant musical collectives in recent history, Inspectah Deck (born July 6, 1970), has never fallen victim to the ill powers that be. He is also one of the Wu-Tang Clan's lesser-known members, despite his talent as both an MC and producer. Born Jason Hunter, Deck earned the first part of his nickname as the quiet, watchful eye in the corner; his other aliases included Rollie Fingers, Fifth Brother, and Rebel INS, the latter a graffiti name tag he used as a youngster. 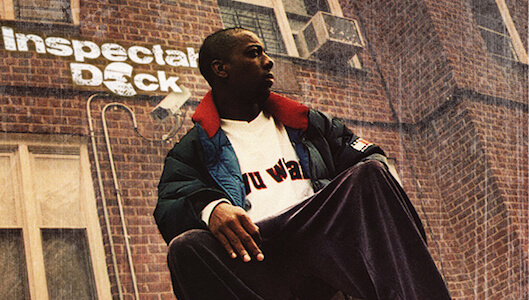 Deck was born in Brooklyn but grew up on Staten Island, attending school with several future Wu members. He was heard on most of the key tracks from the group's classic 1993 debut, Enter the Wu-Tang (36 Chambers), including the singles “C.R.E.A.M.” and “Protect Ya Neck.”

He made guest appearances on most of the ensuing Wu-Tang solo projects, with particularly attention-grabbing work on Raekwon's Only Built 4 Cuban Linx… and GZA’s Liquid Swords.

However, the release of his own solo debut –– which was rumored to have been completed in 1995 –– was postponed indefinitely.

Meanwhile, “Let Me at Them,” effectively a Deck solo track that was credited to the Clan, appeared on the Tales from the Hood soundtrack in 1995. Deck was an overlooked presence on the Clan's sprawling second album, Wu-Tang Forever (1997); among other appearances, he produced the track “Visionz” and contributed the essentially solo “The City.”

In 1999, he finally released his debut solo album, Uncontrolled Substance, which featured a number of less-exposed Wu-Tang affiliates as guests, not to mention more of Deck's own production. The record sold pretty well, climbing into the Top Five of the R&B/Hip-Hop chart.

Deck subsequently returned to the Wu-Tang fold for the albums The W and Iron Flag. In 2003 the rapper released his follow-up, The Movement, and continued releasing solo sets –– such as 2006's Resident Patient and 2010's Manifesto/Manifesto Redux (Dubstep), which features guest-appearances from Raekwon, Cormega, Termanology, Planet Asia, Cappadonna, Kurupt, and M.O.P.'s Billy Danze –– every few years.

He also appeared on dozens of additional tracks by his Wu associates, and is still known today to merge both the deep soul and righteous posturing of the decade's urban legends seamlessly with today's current events.

By challenging both conventional big business standards and popular hip-hop principals, Inspectah Deck is poised to enrich the rap game with one his most thought provoking and lyrically cohesive works to date.

But he don’t know the meaning of dope / When he’s looking for a suit-and-tie rap that’s cleaner than a bar of soap / And I’m the dirtiest thing in sight / Matter of fact, bring out the girls and let’s have a mud fight