On Actors and Actresses…

“There is a dreadful story that I hate actors. Imagine anyone hating Jimmy Stewart… Jack L. Warner. I can't imagine how such a rumor began. Of course it may possibly be because I was once quoted as saying that actors are cattle. My actor friends know I would never be capable of such a thoughtless, rude and unfeeling remark, that I would never call them cattle… What I probably said was that actors should be treated like cattle.”

(About Claude Jade, who starred in Topaz (1969)) “Claude Jade is a brave nice young lady. But I don`t give any guarantee what she will do on a taxi's back seat.”

(Eva Marie Saint on Hitchcock) “He said, ‘I don't want you going back to sink-to-sink movies. You do movies where you wash the dishes looking drab in an apron. The audience wants to see their leading ladies dressed up.’ He saw me as others didn't.”

(On directing Charles Laughton) “You can't direct a Laughton picture. The best you can hope for is to referee.”

“When an actor comes to me and wants to discuss his character, I say, ‘It's in the script.’ If he says, ‘But what's my motivation?,’ I say, ‘Your salary.’”

(To Ingrid Bergman when she told him that she couldn't play a certain character the way he wanted because “I don't feel like that, I don't think I can give you that kind of emotion.”) “Ingrid… fake it!”

(About Dario Argento and his film Profondo Rosso (1975)) “This young Italian guy is starting to worry me.”

“Cary Grant is the only actor I ever loved in my whole life.”

(On his cameos) “One of the earliest of these was in The Lodger (1927), the story of Jack the Ripper. My appearance called for me to walk up the stairs of the rooming house. Since my walk-ons in subsequent pictures would be equally strenuous… (boarding buses, playing chess, etc.) I asked for a stunt man. Casting, with an unusual lack of perception, hired this fat man!”

(Regarding The Birds (1963)) “You know, I've often wondered what the Audubon Society's attitude might be to this picture.”

(On North by Northwest (1959)) “Our original title, you know, was “The Man in Lincoln's Nose’. Couldn't use it, though. They also wouldn't let us shoot people on Mount Rushmore. Can't deface a national monument. And it's a pity, too, because I had a wonderful shot in mind of Cary Grant hiding in Lincoln's nose and having a sneezing fit.”

“To make a great film you need three things – the script, the script and the script.”

“If it's a good movie, the sound could go off and the audience would still have a perfectly clear idea of what was going on.”

“It's only a movie, and, after all, we're all grossly overpaid.”

“The length of a film should be directly related to the endurance of the human bladder.”

“Even my failures make money and become classics a year after I make them.”

“A good film is when the price of the dinner, the theatre admission and the babysitter were worth it.”

On Murder and Suspense…

“Fear isn't so difficult to understand. After all, weren't we all frightened as children? Nothing has changed since Little Red Riding Hood faced the big bad wolf. What frightens us today is exactly the same sort of thing that frightened us yesterday. It's just a different wolf. This fright complex is rooted in every individual.”

“I made a remark a long time ago. I said I was very pleased that television was now showing murder stories, because it's bringing murder back into its rightful setting… in the home.”

“Seeing a murder on television… can help work off one's antagonisms. And if you haven't any antagonisms, the commercials will give you some.”

“There is no terror in the bang, only in the anticipation of it.”

“Always make the audience suffer as much as possible.”

“Drama is life with the dull bits left out.”

“In films murders are always very clean. I show how difficult it is and what a messy thing it is to kill a man.”

“Man does not live by murder alone. He needs affection, approval, encouragement and, occasionally, a hearty meal.”

“I am scared easily, here is a list of my adrenaline-production: 1: Small children, 2: Policemen, 3: High places, 4: That my next movie will not be as good as the last one.”

“I don't understand why we have to experiment with film. I think everything should be done on paper. A musician has to do it, a composer. He puts a lot of dots down and beautiful music comes out. And I think that students should be taught to visualize. That's the one thing missing in all this. The one thing that the student has got to do is to learn that there is a rectangle up there… a white rectangle in a theater… and it has to be filled.”

“I'm frightened of eggs, worse than frightened, they revolt me. That white round thing without any holes… have you ever seen anything more revolting than an egg yolk breaking and spilling its yellow liquid? Blood is jolly, red. But egg yolk is yellow, revolting. I've never tasted it.” (on his lifelong fear of eggs – Ovophobia)

(When accepting the American Film Institute Life Achievement award) “I beg permission to mention by name only four people who have given me the most affection, appreciation, and encouragement, and constant collaboration. The first of the four is a film editor, the second is a scriptwriter, the third is the mother of my daughter Pat (Patricia Hitchcock), and the fourth is as fine a cook as ever performed miracles in a domestic kitchen. And their names are Alma Reville.”

“In the old days, villains had moustaches and kicked the dog. Audiences are smarter today. They don't want their villain to be thrown at them with green limelight on his face. They want an ordinary human being with failings.”

“These are bagpipes. I understand the inventor of the bagpipes was inspired when he saw a man carrying an indignant, asthmatic pig under his arm. Unfortunately, the man-made sound never equalled the purity of the sound achieved by the pig.”

“We seem to have a compulsion these days to bury time capsules in order to give those people living in the next century or so some idea of what we are like.”

(His entire acceptance speech for the Irving Thalberg Memorial Award) “Thank you.”

“(Walt Disney) has the best casting. If he doesn't like an actor, he just tears him up.”

“I was an uncommonly unattractive young man.”

“I am a typed director. If I made Cinderella (1937), the audience would immediately be looking for a body in the coach.”

“Blondes make the best victims. They're like virgin snow that shows up the bloody footprints.”

“This award is meaningful because it comes from my fellow dealers in celluloid.”

“Television has done much for psychiatry by spreading information about it, as well as contributing to the need for it.”

“There is nothing quite so good as a burial at sea. It is simple, tidy, and not very incriminating.”

“This paperback is very interesting, but I find it will never replace a hardcover book… it makes a very poor doorstop.”

A Year of Hitchcock

Weekly podcast and discussion of Hitchcock's films from the authors of A Year of Hitchcock: 52 Weeks with the Master of Suspense.

The Master of Horror Alfred Hitchcock

An in-depth biography and links to find more on Hitchcock himself.

Works by or about Alfred Hitchcock in libraries (WorldCat catalog)

Alfred Hitchcock at the BFI

Alfred Hitchcock and Anny Ondra in Sound Test for Blackmail (1929)

Online exhibit from Screen Online, a website of the British Film Institute

EuroScreenwriters features interviews with Hitchcock, both text and video 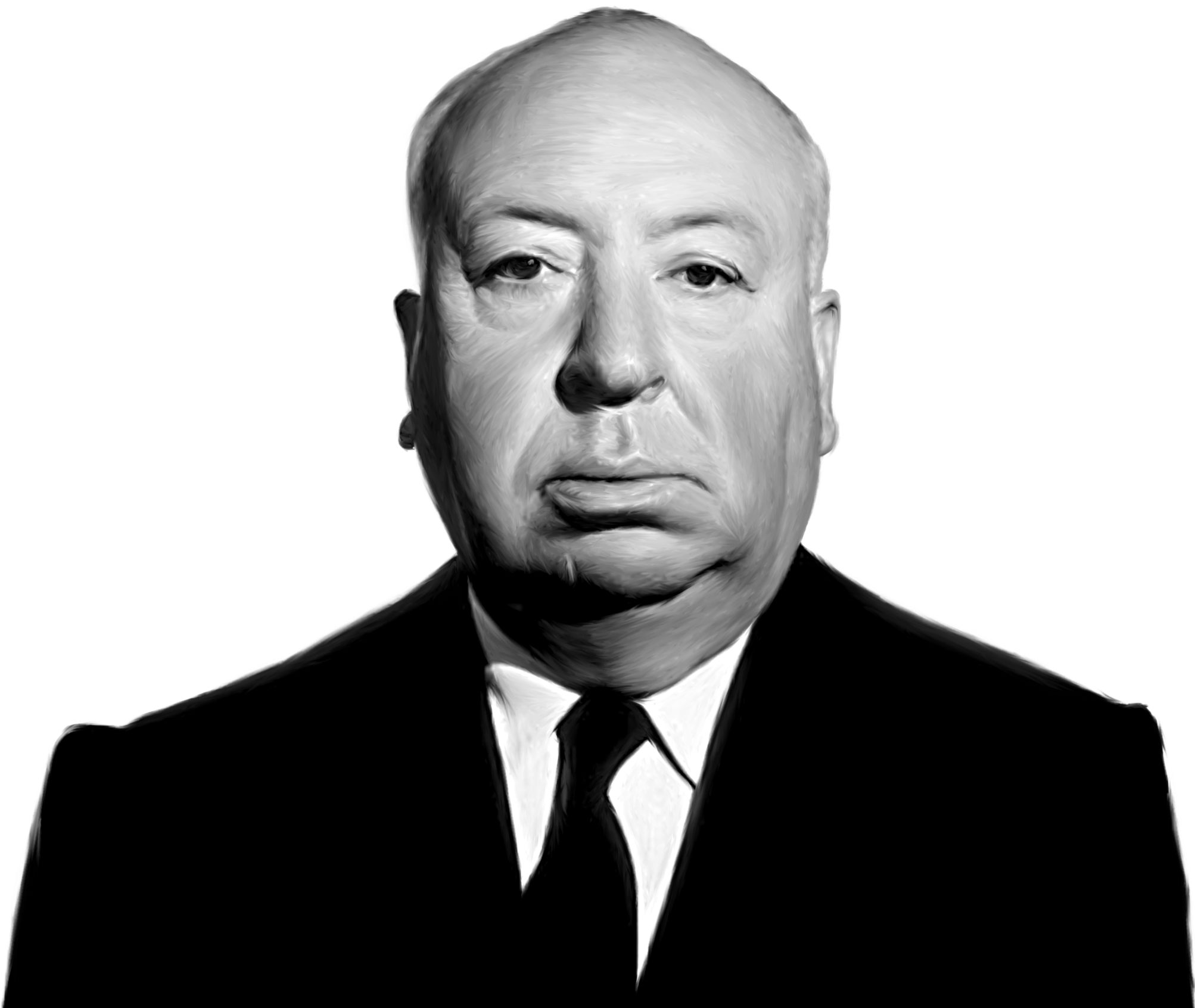